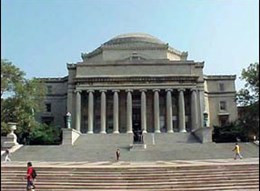 The Low Memorial Library is located on the campus of Columbia University in New York City.  Built in the Roman classical style, it was named a historic landmark in 1967 and was added to the New York City Register of Historic Places. Completed in 1897, Low Memorial Library today houses the offices of the university present and senior administrators and is the iconic image of higher education in New York City. It was erected using the best technology and craftsmen of the time, but time and the elements had taken their toll on the cast iron arched double-glazed windows. What had been designed to provide thermal efficiencies, had allowed moisture to get between the glass units over the years and fogging. Paint was peeling and the putty was falling out.

The challenge on this project was to restore the glazing to provide a long-lasting seal while replicating the same historic look of the original windows. The requirements of the architect, consultants and the landmark council were stringent.

The painted cast iron window frames were removed and sent to Alabama to be refurbished.  After refinishing, they were erected and triangular-shaped monolithic pieces of glass were hand cut on-site for each opening due to the non-uniformity of the individual openings.

Tremco Glazing Solutions Group then partnered with David Shuldiner to custom design the glazing components utilizing today’s technology to match the original look of the old putty-glazed window system. Tremco’s SGT-921 double-sided Foam Tape was applied to the interior surface.  Tremco’s Spectrem® 2 medium modulus silicone sealant was applied underneath the tape, which structurally adhered the glass to the metal frame. The final element of the glazing system was a custom silicone rubber extrusion used on both the interior and exterior of the glazing system.

To ensure performance over the long term, it was essential that all of the components were compatible. Being the only supplier capable of providing the total glazing solution, Tremco was able to provide complete assurance of compatibility for the glazing sealant, gaskets and tapes. With more than 75 years in the design and manufacture of glazing products and more than 12,000 custom extrusions, Tremco’s design engineers went to work.

Custom colored silicone sealants would not have replicated the original putty look and would have had the potential to attract dirt. It was determined that a custom silicone rubber extrusion would be the best to mimic the look of the putty glazing used when the windows were first installed. The sealant was applied in an “L” shaped bead around the perimeter of the window and the extrusion was inserted into it. The gasket was designed with a barbed end, which was inserted into the wet sealant to facilitate adhesion of the sealant to the gasket while providing the added security of a mechanical engagement in and around the sealant.

Silicone sealant has poor moisture vapor transfer rates, allowing moisture to pass through the sealant and gasket to infiltrate the area between the two panes of glass. On the interior side of the system, the SGT-921 glazing tape was cut back in two locations and weep baffles were installed on each lite to allow ventilation, while small holes were drilled through the rubber extrusion at these locations to prevent condensation to occur between the units.

Both the interior and the exterior of the double-glazed windows were different colors, requiring matching silicone sealant and silicone rubber extrusions on each side. As each piece of glass was cut on-site and placed in the frame, Shuldiner’s craftsmen would then cut and splice around the silicone extrusions to hand fit each piece in place. Using these custom designed and colored extrusions carefully placed in each window frame, even the floral ornamentation at the hub of each window appears flawlessly set in putty from an era long past.  Using today’s technology and the epitome of craftsmanship, Columbia University’s Low Memorial Library will stand as an icon to education for years to come.